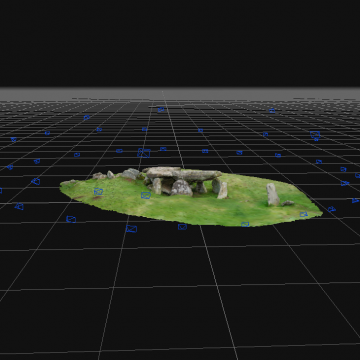 How on earth could we produce a 3D model, where drones are not allowed? When researching a route to a training establishment for a recent QGIS training course, we were intrigued to see a ‘pin’ on Google Maps for a something called ‘Arthur’s Stone’, which appeared to be a small neolithic burial chamber, overlooking the ‘Golden Valley’ in Herefordshire. We immediately wondered just how this would look as a 3D model! Investigating the site further, it became clear that it … Read More

Never having been to Petra, and not really being able to visit any time soon, I was inspired by a post on packet39.com where they created a 3d ‘model’ of the Treasury building there. I thought I’d give it a try. But instead of using commercial software to generate the point cloud and mesh, I thought I’d give it a go with COLMAP, using this excellent tutorial over at sketchfab. So I downloaded 100 or so images of the Treasury … Read More